I was sent passes to a screening to view the movie. No other compensation was received. All opinions are my own.

I personally love when movies are made out of a novel. Some of my favorite movies were books first. It not only brings the characters to live but brings to story to people who may not have ever picked up the book. So I was eager to watch The Light Between Oceans because it was first a book. This movie seemed to be the perfect movie to go to with one of my best friends so that’s what I did. Read the synopsis below and I’ll go into my review. 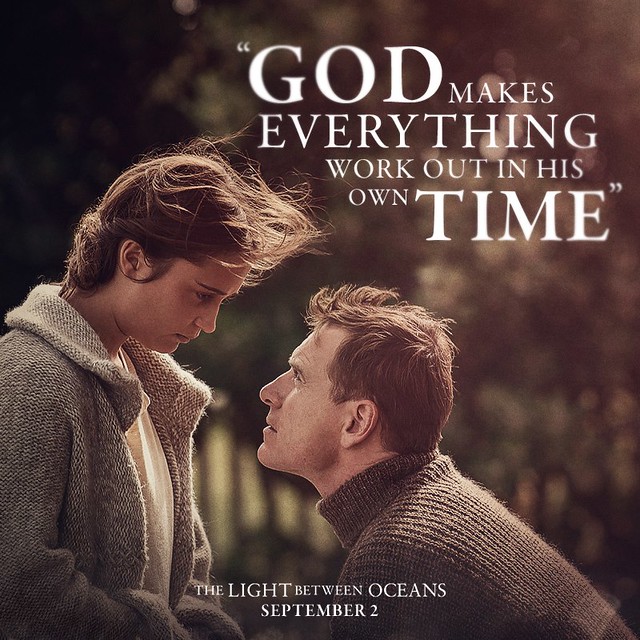 Tom Sherbourne, a lighthouse keeper and war veteran, and his wife Isabel are living off the coast in post-World War I Western Australia. One day, the couple rescue a baby girl who has washed up on an adrift rowboat and decide to informally adopt her as their own, whom they name Lucy. But as Lucy grows older, Tom and Isabel discover the consequences of raising the child when a visit to the mainland and an encounter with a particular woman threatens to break apart their blissfully happy family. ~ From Wikipedia

First of all, I wish I had the chance to read The Light between Oceans before I went to see it. That is one thing I like to do before heading out to see a movie adapted from a book. With that being said, I wish there was a little more depth into each character. I didn’t really understand Tom much and Isabel just seemed like a free spirit but there is obviously a lot going on under the surface once she’s married and living off the coast without anyone else.

Without giving away the full movie, I don’t like the way everything went down once “the woman” came into the picture. Yes, everyone displays guilt differently but the whole thing could have been resolved a whole lot better. I did like the movie overall. I think its a good movie to watch with your girlfriends… and might be a tearjerker.

To see what I’m referring to, make sure you go see The Light Between Oceans this weekend. You can also follow the movie on Facebook or twitter.

I remembered last night that I hadn’t started th

Speaking to my soul @colhousedesigns Great to se

Don’t judge me: I drove to a parking spot area n

Are you ready for Taxos? #hosted @barrio_columbus

Last day of August. First day of school (for me).

Hello! 👋 It just me, Ashley... having her secon

Fresh cut from @kingculturellc and iced mocha from

Thanks to my Apple Watch, I’ve been keeping trac

August spreads in my #bulletjournal are done! Di

We are participating in the 17th annual @bullrunco

We don’t get out much these days but a @columbus

Update on #bulletjournaling: I’m getting the h

July 1st. Half the year is over just like that. I

3 years ago today, I went skydiving at @start_skyd

I did a photo shoot Saturday for @mazobeautyco and

I haven’t been taking Olivia out much because sh

For me, quarantine equals weight gain. 😬😒 I